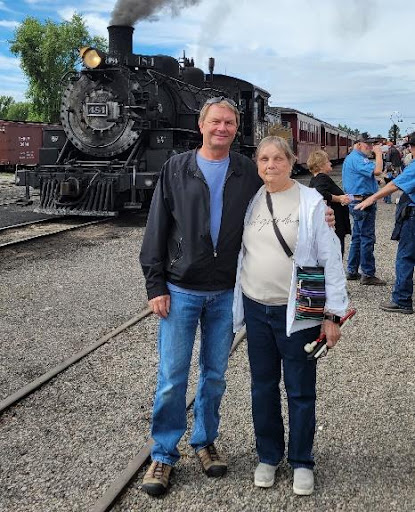 If anyone can attest to the evolution of assistive technology over the past 35 years, it’s Ann Byrne, Donka’s blind services instructor. Ann was born blind and has always been at the forefront of using and exploring the various technologies available to help people with visual impairments

When Ann was in college in the early 1960s at the University of Illinois Urbana-Champaign – which was before personal computers were commonplace. Studying was something that had to be carefully planned and scheduled way in advance.

“Some of the books I needed were available from the Library for the Blind in braille and some on reel-to-reel tapes. But you had to request them way in advance to get them in time,” Ann explains. “For those that weren’t available, you had to send the entire book to a service that would read and record the book. But it could take up to 12 weeks to get it back.”

The recording was done on a record-like disk or reel-to-reel tape. “The sound quality was poor and I remember having to put dimes on the arm of the record player because the disk skipped a lot,” Ann laughs.

Another way to navigate a book was to have someone read it to you. Through the school, Ann could schedule a volunteer to read to her or ask her mother to help out. To write a paper, Ann typed it and then had a sighted person check it and retype it.

In college, Ann studied to be a teacher and worked as a rehabilitation trainer for the State of Illinois. However, she made a career change shortly after her husband brought a computer home. She became fascinated with computers and programming and decided to change her career.

At the time, ComEd needed programmers and was hiring people and training them in-house to program. Ann decided to apply, and to her delight, was hired in 1980. Ann and ComEd were total pioneers at the time. There were few women programmers and few corporations accommodating people with disabilities to the extent of ComEd. To help her, they purchased a braille terminal and later upgraded it to a speaking terminal. 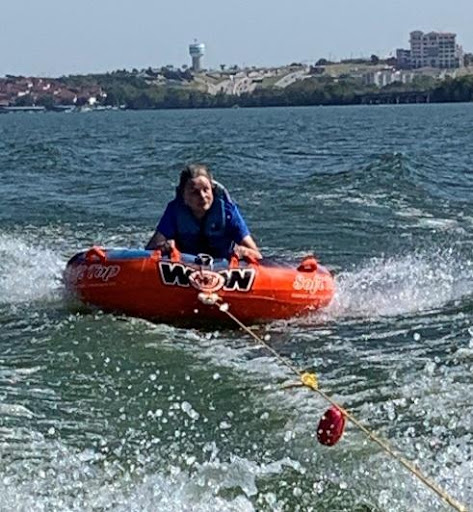 Ann has an adventurous spirit and is an inspiration to all she meets. Here she is tubing in Texas!

“They were very accommodating and would purchase any technologies I would request as new ones came out,” Ann says. “I was a damn good programmer and so they were happy to buy anything that could increase my productivity.”

Ann retired from ComEd in 2002 after 22 years, but quickly became bored at home. In 2003, she started teaching at Donka, specializing in training people with visual impairments. Today, she mostly trains students to use JAWS, a voice-activated software program that interfaces with many popular computer applications – most notably Microsoft Office. She also trains students to use their iPhones, as well as the accessibility tools that are built into all computers, phones, and tablet devices.

When asked what AT she uses most at home, Ann says that she uses her iPhone the most. “It can read the recipe on the back of the Bisquick box to me, which is very helpful,” she says. “I also really like a barcode reader that helps me with grocery shopping so that I get the right products and size.”

“The navigation feature is also great for walks,” she continues. “I can figure out exactly where I am. It’s also helpful when I am in an Uber and I want to know if the driver is taking me where I need to be.”

Donka is fortunate to have Ann as an instructor. She is a great role model and can authentically relate to her students’ frustrations on days the need extra encouragement.

The subscribe button is for subscribing to the Donka Newsletter

Subsrcibe to the Donka Newsletter